What You Make of It: Old Shutter Wall Decor with Eleanor of Oh Louise! Personalized Stationery 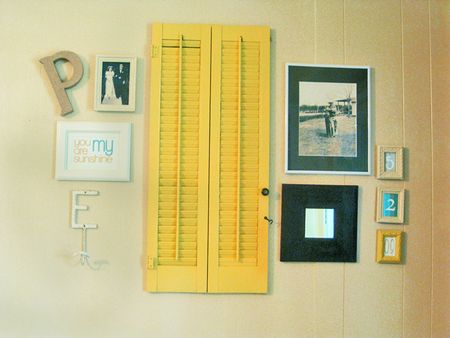 I love the idea of reusing old shutters as thrifty home decor. My mother in law gave me a few of these small shutters that were previously white & worn.

My first step was to thoroughly clean the shutters to remove all the old grime so that the paint would stick.

I removed the hardware with a screwdriver and then I used yellow spray paint to brighten things up.

I did 2 coats, let it dry & sprayed on a clear protective coat. 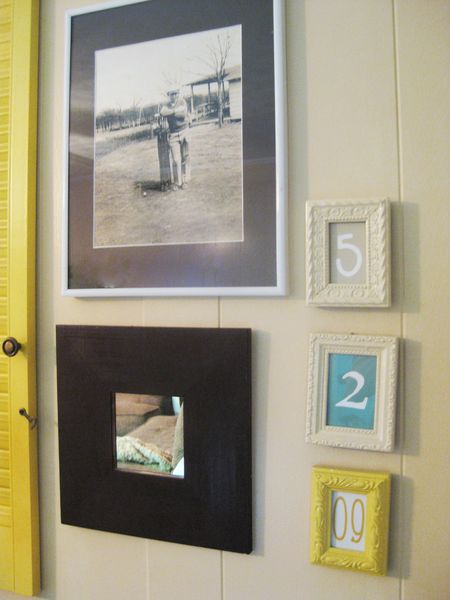 I put the hardware back on, nailed 2 nails in the wall & hung the shutters.

My idea at first was to stick pictures in the slats, but once I put the shutters & other decor on the wall, I thought pictures might clutter things. If you do want to use pictures, I recommend adhering them to the shutter slats using double sided tape or “glue lines” found in the scrapbooking section at craft stores. 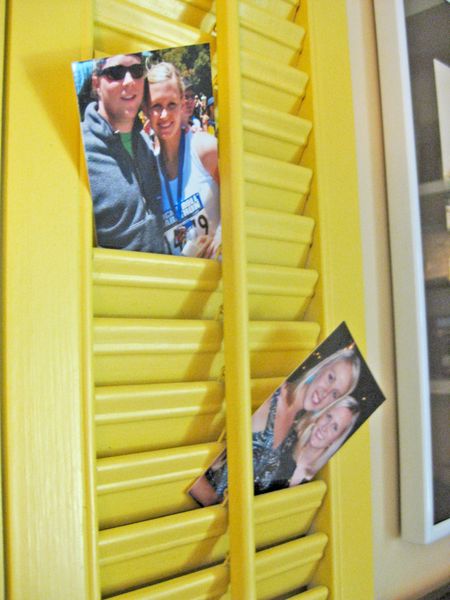 If you do choose to put photos in your shutter slats, a tip is to used double sided tape to help the photos stick. Sometimes the slats are a little too big to hold photos well.

I decorated around the shutter by finding old pictures of mine and Peter’s grandparents, creating a few DIY prints, as well as spray painting a plain wood mirror a deep chocolate brown.

Visit our guest contributor Eleanor Boynton at Oh Louise! for her line of personalized Stationery.

Absolutely love this idea of using old shutters like this! :) I always like the reused window look for the inside, mirrors, pictures, chalkboards. But I've never thought of reusing old shutters! Great colors too! :)