Off the Shelf Book Review: Taken by Brock Eastman

Vintage Indie would like to send a warm welcome to our special guest Ann Hibbard of The Joy of Writing. We are so pleased to have her as our guest reviewer covering "The Quest for Truth" series starter, Taken by Brock Eastman. 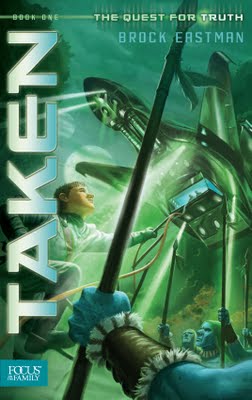 We are a family of avid readers from youngest to oldest. One of the difficulties with children who are strong readers, however, is finding books that challenge their reading abilities while still respecting their maturity level. Focus on the Family product marketing manager and author Brock Eastman provides what I consider to be an excellent resource to meet that need.

Eastman's "The Quest for Truth" series jumps off to an exciting start with the book Taken. The history of mankind has been long lost, leaving only myths and legends to shed any light on humanity's origin, including their home planet. But a few archaeological finds lead a handful of archaeologists to believe that they might have found information about Ursprung, the planet legends indicate to be the birthplace of mankind. Unfortunately, the same finds convince less scrupulous individuals that there is profit to be had from the discovery of Ursprung. And they will stop at nothing to obtain that profit.

My eleven-year-old daughter and I read Taken together, and we are now both officially hooked. I will admit that I was concerned about the science fiction nature of the book. My daughter has a mind inclined toward fantasy, but has not been exposed to much science fiction. I, on the other hand, have no natural inclination toward fantasy, but I do enjoy the occasional sci fi and fantasy movies and TV shows. Although I know without a doubt both of us missed many technical details, neither of us had any difficulty following the story or learning about the technology. The Visual Glossary at the end of the book proved very helpful to us both. Be warned, however. There are spoilers in the glossary!

It is important to note that Taken is not an independent read. There is no closure whatsoever in this novel, and it is my suspicion that the remaining books in the series will be the same, right to the very end. That can obviously be both a positive and a negative.

I also should mention that the primary society represented in Taken is one that appears to have lost knowledge of the Christian faith. While only hints exist in Taken, I get the impression that a great deal of the discoveries in the series as a whole will revolve around spiritual awakenings. In the meantime, however, even the "good guys" are not operating with an understanding of God's presence and help in their lives.

I am excited about Taken and its sequels for several reasons.

As I said, my daughter and I are hooked. We greatly anticipate diving in to book two of the series!

Thanks again to Ann Hibbard for her time reviewing this book, please visit her website for her encouraging writings.

Truth in Review/ The above book  Taken was provided free of charge for our review. We were not paid for any content in our review or sponsored feature. The review is that of our personal opinions. - Gabreial Wyatt, Editor. Visit our Disclaimer/Disclosure Page for more info.

Tags: Ann Hibbard, Brock Eastman, Focus on the Family, Indie, Off the Shelf Book Review, Taken, The Joy of Writing, The Quest for Truth, Vintage, VintageIndie

Thank you so much for the encouraging words and the honor of the time you spent reading. I do hope you'll continue along the quest with me.