If you are a home educator in the area, it could be that you've enjoyed a few student productions from The Children's Theatre. I know that we have enjoyed so many of them through the years at the The Taft Theater, 5th & Sycamore Streets Cincinnati, OH 45202.

However, if you haven't heard The Chidren's Theatre is super excited to invite you to their new location off of Red Bank Road. The Ralph and Patricia Corbett Showtime Stage. 4015 Red Bank Road Cincinnati, OH 45227 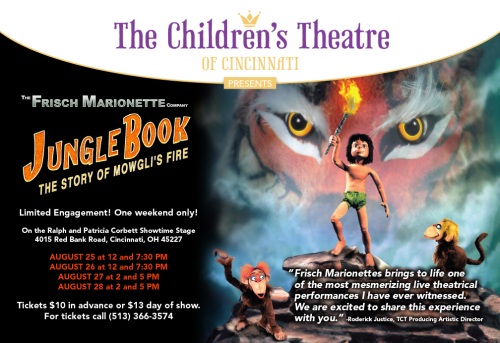 Coming up on August 25th at 12 and 7:30pm you can visit opening night of  The Frisch Marionette Company’s production of JUNGLE BOOK:  THE STORY OF MOWGLI’S FIRE! 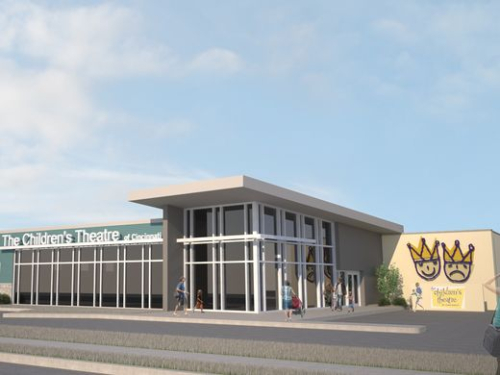 Produced and directed by Kevin Frisch and adapted from an original script by Nicholas Coppola.  Original music composed and performed by Steve Frisch.

Tickets are going fast for this opening weekend! Add some last minute summer fun to your summer bucket-list.

Tickets $10 in advance or $13 at the door.  Every person, regardless of age, needs a ticket. Children 1 year-old and younger who do not need a seat and will sit on your lap will be required to have an Infant Lap Pass for each show in every seating location throughout the theater. Lap Passes are just $1.

About Kevin Frisch and The Frisch Marionette Company:

In 1986, Kevin Frisch moved to New York City and joined The Puppetworks, Inc. of Brooklyn, New York. The next nine years were spent touring the New York Metropolitan area as well as performing in The Puppetworks’ permanent theatres in Brooklyn and Macy's Herald Square. In 1995, Kevin established The Frisch Marionettes in Cincinnati as an exceptional entertainment and educational experience for children and adults alike, proclaiming the many virtues of this unusual art form.  Kevin Frisch has built puppets, masks and costumes for The Central Park Zoo, New York Aquarium and The Puppetworks Inc. of New York. His puppets have been seen in People Magazine, SHOWTIMES' "Twisted Puppet Theater", the PBS Documentary "The American Puppet," and onstage with The Cincinnati Opera as well as in the New York store windows of ‘Saks 5th Ave.’, ‘Bloomingdale’s’ and ‘Hermes New York’ and in the family film “Mr. Magorium’s Wonder Emporium” featuring Dustin Hoffman and Natalie Portman. Kevin and his puppets have appeared in television commercials for Joseph Toyota of Cincinnati. Most recently, his puppets have appeared in the hit television shows “2 Broke Girls” on CBS and “Warehouse 13” on the Syfy channel.  For the past four seasons, The Frisch Marionette Company has designed puppets for TCT’s MainStage productions at the Taft Theatre.

Mark your calendar for MainStage theatre productions coming this fall. Alice in Wonderland, Elf The Musical JR., The Wizard of Oz, Tarzan the Stage Musical Based on the Disney Film!

Be sure to come back here to Vintage Indie for your chance to win tickets to the first show Alice in Wonderland in October!

Disclaimer:  I was provided with tickets for my family in exchange for promotional purposes. All opinions are my own.